skip to main | skip to sidebar

The other day I decided it was time to break in my first gaiwan. 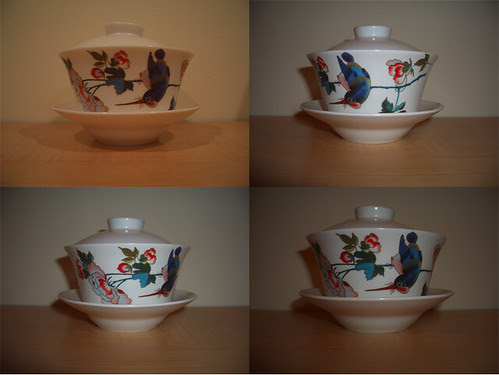 A gaiwan is a vessel for drinking tea and is of Chinese origin. It has 3 parts; a saucer, a cup/bowl, and a lid. Tea leaves are put in the gaiwan loose, and when it is time to drink, one uses the lid to strain the tea, either into another vessel for drinking or for direct consumption from the gaiwan. Green and white teas are preferentially used in the gaiwan. I found that using tea with larger leaves was easier to strain; I think I would have difficulty with a rooibos as it seems to be finer.

My gaiwan is the "Curious Kingfisher Gaiwan" from Tevana, purchased back in March (it is now discontinued, which is why it was on sale; they now carry a mug version). It was sitting nice on a shelf in my room, and I figured I really ought to put it to use. I actually purchased two of them; one was for a friend with an interest and knowledge in tea, and it was she who first explained to me how to drink tea from it. I was happy to give her an item she enjoyed, as it has a delicate Asian flair which she would appreciate, and was also her first gaiwan. Since they are matching, I think of her every time I see it.

I decided to make Tokyo Lime, a green tea that I received from friends in a care package, so I have no idea what company makes it. Drinking from it took some practice! I eventually successfully developed a one-handed technique to hold the lid on to filter the tea as I drank (though this is not the way you're supposed to do it, I learned later). I did have some trouble when it was nearly empty, though; due to the wide opening at the top, if I tipped it too far and misjudged how much was left in it, it spilled out the sides and ran down my chin. >.< 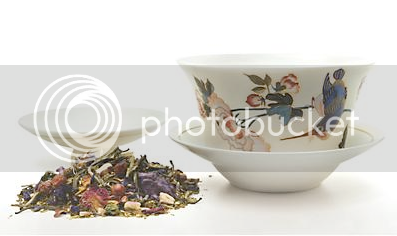 From the Teavana page with the products with the kingfisher:
Beautiful and symbolic. Featuring a brightly plumed kingfisher (a symbol of luck) perched upon a blooming peony branch (a symbol of Spring, female beauty and prosperity), this mug was created using a firing technique created during the Ming Dynasty(1368-1644 AD) in China. The luminescent, silky glaze is impossible to resist and helps the hand gilded gold and colors leap off of the tea cup.

In Japanese, the peony is "botan" (牡丹) and kingfisher is harder to determine, as there are different types, and I have no idea what type of kingfisher this is. Perhaps "kawasemi" (川蝉) which translates to "river cicada". A google-search brought up lots of images of gorgeous plumage; the color is amazing and I can see why a color may share the same name as the bird.*


I'm still learning about tea; my main interest is kimono. Though I find that I am favoring loose-leaf teas now to tea bought in bags from the grocery store. I think having the right equipment to use it is essential to that enjoyment (like the travel mugs I have with filters).